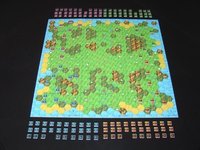 If you like large playing fields and you want to lead a huge army with many different units, buy a game of the STRATAK WARS INDIVIDUAL series!

For the maps and counters there are different variants available when you click on the product picture.

The INDIVIDUAL modules are exclusively available in this shop only.


It contains maps with coastal borders to build a small, medium or large continent.
Additional maps include sea fields with islands in several sizes.

There are pure land fields also you can use as alternative maps or to create a landscape without coast.

There are two additional alternatives:


There are several counter sheets, so you can play with 2 to 7 players.

For the first and quick games you can use tanks, fighters and bombers which might be amended by ownership counters (but need not to be amended necessarily).

If you like to play more complex games, you can add additional counters.

The rules come as documents with text only.
All maps and counter sheets are delivered uncut, except you order an additional cutting service.

All maps and counters for the STRATAK WARS INDIVIDUAL series will be produced as a make-to-order production, so you can order individual text for the maps for example.

Hence we can widely customize the STRATAK WARS INDIVIDUAL series to fulfill your wishes.

Some information about the game:

The leaders of the STRATAK world states want to expand their area of influence and you are one of the leaders.
Take tactical decisions how to use your forces with best results.
Use the advantages of your weapons cleverly in combat.
Think about the right strategy how to use your supply efficiently.

Build your forces!
Defeat your opponents!
Conquer the STRATAK world!

May the best win!


Short description of the game:

The objective is to conquer most of the cities within a playing time as agreed at the beginning of the game. So the playing time is flexible and can be decided by the players.

At the beginning of the game you set 1 tank on each city, added by additional units like tanks, fighters, bombers and landing ships, depending on the agreed supply points and rules.
By conquering foreign cities you expand your domain.
Depending on the units you choose for combat, you have advantages against the units of other players which are influenced by the landscape. The landscape influences movement and combat as well.

Supply points are gained for recently conquered cities only. So you have to move forward, if you want to expand your armies.

If you conquer complete foreign countries you can produce new units in the foreign cities in addition to your own cities. But take care! These cities are difficult to hold as you loose this ability, if just one city of this country is conquered by another player.

The game ends after the agreed time or number of rounds ends or if one player sets his last ownership counter.


Alternatively you can play the game until one player remains.
But this variant may take a long time, depending on the size of the playing field and the used units.

Recommended for players with an age of 14 years or older.
Not suited for children younger than 3 years.
The game includes swallowable small parts.

If you are overloaded by the possibilities: We will help you willingly!

Send us an email to Info@STRATAK.com.