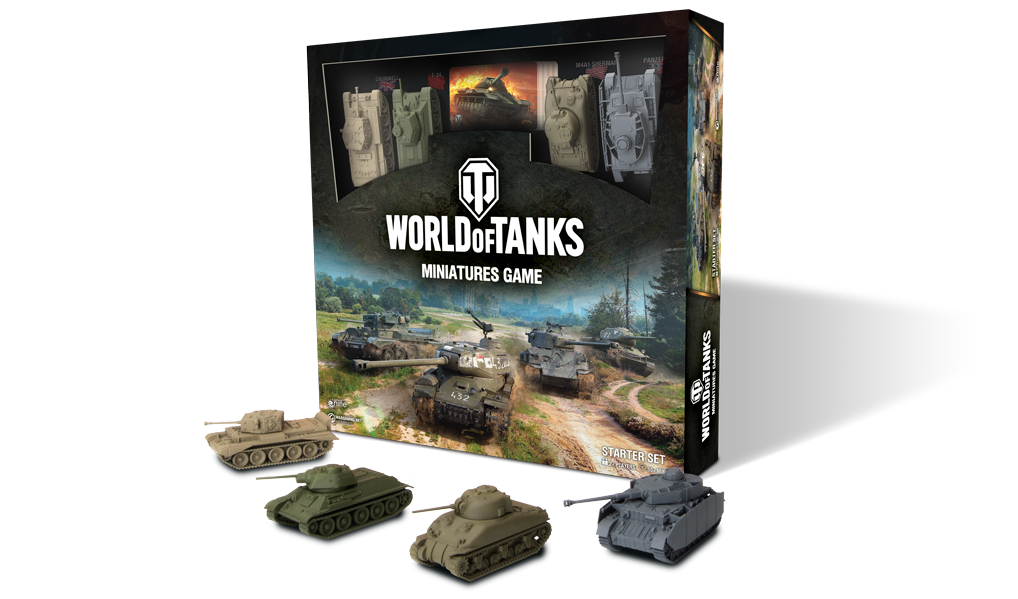 What is the World of Tanks: Miniatures Game?

The World of Tanks: Miniatures Game is an easy to learn, quick play, small scale tabletop game. You take command of a Tank Platoon, seeking to destroy your opponent’s tanks and secure victory. It is a fast and furious, do-or-die game – In half an hour you can pick your tanks and crew, upgrade them to your specifications, defeat your enemy (or die trying), and be ready for the rematch!

Players of the online sensation World of Tanks will instantly feel at home, recognising the tanks and terminology from the game, whilst players that have yet to try the game, will be able to quickly pick up the skills and tactics needed to compete with even the most harden combat veteran.

In the World of Tanks: Miniatures Game Starter Set you will find everything they need to begin playing including:

Each tank has a type Light, Medium, Heavy, Tank Destroyer or SPG, and a set of stats that determine how far they can move, how well they shoot, and how well they can survive under enemy fire. These types mean that no two tanks stats will perform quite the same in battle, and opens up different tactical choices for you. Building a platoon with a mix of types that suits your play style will be the key to victory.

Once tanks are ready to hit the tabletop, you make the choice to either close with the enemy in a glorious rush, or camp in cover, taking shots as the enemy exposes themselves to your fire, carefully avoiding return fire.

Tanks are designed to be very manoeuvrable and can effectively turn on the spot and by using the measuring arrow a tank can quickly perform even the most complex manoeuvre. Having a low Initiative puts a Tank at a disadvantage when it comes to close range gun fights where they are forced to move first and fire last, of course most Tanks have a turret which allows them to still get some shots even if outflanked.

Once all the Tanks have moved it is time to begin firing.  Concentrating your fire may mean that you are able to knock out an enemy tank, whereas spreading the fire around could mean that you inflict critical hits that reduce the ability of the enemy to strike back. Applying the right strategy at the correct time will be the difference between victory and defeat.

Massing your fire and picking a target is only half the battle as the choices you make during the movement phase will have an impact on your accuracy. You can stay still risking becoming a target for enemies looking for an easy kill, also becoming deadly accurate, carefully tracking their enemies and picking the best time to fire.

We’ll be covering every part of World of Tanks: Miniatures Game gameplay in much more detail in a series of in-depth previews over the coming weeks so stay tuned to the website for more information.

No two tanks are exactly the same and you can use crew, module, and upgrade cards to further enhance your tanks, or minimise the impact of any shortcomings. These extraordinary crews and additional equipment are what separates an individual tank from the factory standard. Each of these has been influenced by the online game to make it intuitive for existing online gamers to make the leap. New tank commanders heading to battle for the first time can use the suggested crew, module, and upgrade cards for their first battles, making it easy to learn the basics before rolling up their sleeves and swapping things around.

However, each tank, crew, module, and upgrade card have a cost that needs to be paid for. Do you choose to run as many tanks as possible with nothing but a basic crew, or do you enhance each tank, carefully selecting the right mix of cards to build synergies? These are the choices you will make in the World of Tanks: Miniatures Game.

The Online World In Your Hands

Each one of the World of Tanks: Miniatures Game tanks are faithful representations of their historical counterpart. They are assembled and painted, ready to go straight out of the box. Inside the Starter Box you will find the British Cromwell, American M4A1 Sherman, Soviet T-34 and German Pz.Kpfw. IV Ausf. H, with expansions bringing more iconic Tanks to life over the coming months.

In addition, you can buy accessories to further enhance your gaming experience including nation-specific Dice and Decal Packs, using imagery straight from the game, a Token Pack with durable full colour acrylic tokens, a Paint Set for people that would like to further enhance their miniatures, a World of Tanks Carry Case, and a double sided neoprene Gaming Mat based on the battlefield of Prokhorovka.

Time To Roll Out! 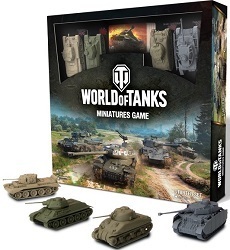